The moon last night.
I'm always interested in how buildings adapt over time. I like peeling back the layers to look for telltale signs of past lives and to attempt to decipher what elements were added over the years. It occurred to me recently that my home was likely lit by oil lamps. Built for mill workers in the 1840s, it was heated via three fireplaces and definitely was not on the gas grid for gas lamps. I can't say when electricity was introduced into the home, but I can say it was before modern codes for safety. The house had been in the same family for much of the last century and the fuse box and wiring had to be replaced when I took ownership.

The moon was nearly full last night as I drove home and the sky clear. I was struck by the light that it emitted onto my street and this sparked another thought: for much of my home's existence, the moon was the only nightlight. Streetlamps were probably not added to this particular area until the middle of the last century at the earliest. Last night the moon was actually brighter than the streetlamps.

There is a design collaborative called Civil Twilight that looks at the history of lighting the city. Cities were originally lit by the moon or gas lamps before electric lamps became the norm. An interesting fact that they uncovered is that in the early days of the electrical grid in our country, we were generating too much energy and it needed to be burned off at night, thus prompting the vast expansion of streetlights. So our streetlight grid is in fact designed to waste energy."Civil twilight" is an astronomical and legal term for the period of general visibility following sunset and preceding sunrise and the team wondered if it would be possible to reintroduce natural light to the cityscape in an effort to minimize energy output. They've developed a prototype for a lunar-resonant streetlight that saves energy, mitigates light pollution, and works with the light of the moon. When the moon is full, the light dims. When the moon is waning, the street light powers up.

In describing their collaborative design process, they said that they were driven by the idea of "brilliant simplicity."

"We believe that insight comes from finding unseen connections, and that interdisciplinary collaboration is the best way to give them form," they write on their Web site.

Brilliant Simplicity became the title for a new documentary from Metropolis magazine, which I've mentioned on this blog. Civil Twilight is one of several design teams interviewed about their research process and their resultant breakthroughs. There are some fascinating projects highlighted in this short film, from next generation solar and biomimicry, to the duo who created the Big Dig House. For more details on the October 29th screening of Brilliant Simplicity in Baltimore, click here. 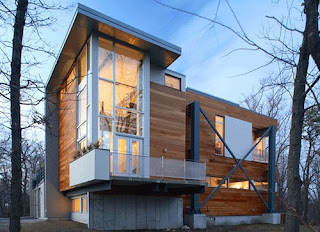 The Big Dig House was created by Single Speed Design and constructed with over 600,000 pounds of materials recycled from Boston's Big Dig.
Posted by Urban Palimpsest at 12:57 PM