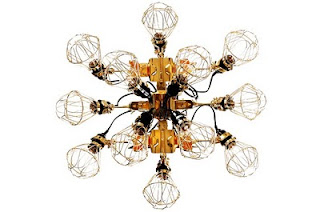 I first saw the work of Japanese designer Kouichi Okamoto, of Kyouei Design, a few years ago at the designboom mart held during the International Contemporary Furniture Fair. He was showing some beautiful ceramics, including a practical and beautiful umbrella stand that I still think about.

Lately I've had lighting on the brain because I need to find ceiling fixtures for several rooms in my house. Okamoto had created whimsical lighting in the past, like this paper lantern designed to look like an actual light bulb. Now it seems the industrial aesthetic that's sweeping lighting design has caught his attention as well. His Reconstructionist Chandelier, pictured above and below, takes the bare-bulb industrial safety clip lamp and elevates it into an open cluster accented by gold. 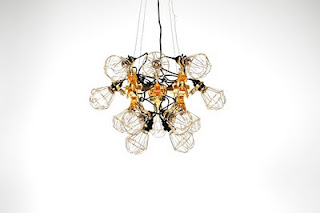 I like it, but with all of the industrial lighting hitting the marketplace—from Pottery Barn to Schoolhouse Electric and beyond—I imagine that in a few years (or months), this may feel as dated as antlers on the walls.
Posted by Urban Palimpsest at 11:37 AM Links to this post

On a Personal Note... 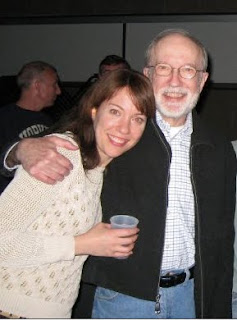 Me and my father in the Spring of 2009, just months after his cancer diagnosis.
Ironic that the post previous to this one announced an event called "Vacation." After posting that back in August of 2010, it seems as though I, too, went on an extended vacation from this blog. The hiatus, I'm sad to say, was because my father, William Joseph Evitts, was very ill with pancreatic cancer. He passed away in December leaving a gaping hole here in the Evitts family and in the Baltimore community. He was an exceptional man, a stellar teacher and writer, and above all else, an amazing father. It was because of him that I became a writer, a teacher, an editor. It was his encouragement that led me to follow my interests and my instincts and explore the world of design and design writing.

Dad defied the terrible odds and lived with pancreatic cancer for nearly 18 months. In his dying, as in his life, he had a grace and an openness that forever changed the way I see things. His death has already begun to move the compass of my work and I look forward to exploring new terrain. "Proceed and be bold," the architect Sam Mockbee liked to say. So now the brave work of living after someone you love dies. I promise to be bold. In honor of dad.
Posted by Urban Palimpsest at 6:02 PM Links to this post