Last night the first-ever Ignite Baltimore event went down at the Wind Up Space in the Station North neighborhood. 16 speakers had 5 minutes and 20 slides (advancing every 15 seconds) to teach the room about something or to share a compelling story. The place was packed and it was, hands down, one of the best events I've been to in Baltimore—and I'm not just saying that because I was one of the speakers. The energy and excitement from the room, generated by the organizers, made for a sociable, fun, and highly engaging evening. There will be a video at some point that I can link to, but until then, I'll leave you with the images and text from my presentation. And I encourage those of you who didn't make it this go round, to mark your calendars for the next one: February 5. For my readers who don't live in Baltimore, you should see if there is an Ignite night in your city. If not, consider starting one yourself...

How to Start a Revolution: Urban Interactions in the New American City 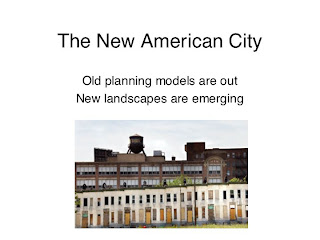 The American city is changing rapidly, yet planning and land use ideas are not keeping pace with our emerging urban landscape. Old models are not meeting our new needs. 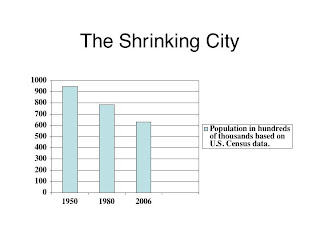 Baltimore is among the many cities to have lost a significant percentage of its residents. We have nearly 400,000 fewer people here today than in 1950. This population loss coupled with the shift from an industrial, port-centric economy, has changed the geography of our city. We have an epidemic of vacant houses, underutilized properties, abandoned sites, and missing teeth in blocks of row houses. 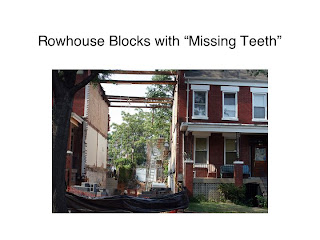 What do we want the future Baltimore to look like? How can we, as citizens, begin to interact with this new geography and advocate for what we need, whether it’s more public space, better sidewalks and bike lanes, more access to the waterfront, or ways to use all these vacant lots? 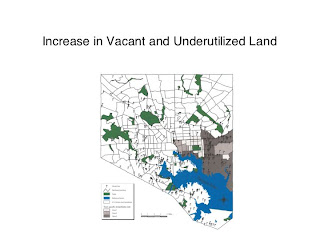 There is an emerging trend in this county that I’ve dubbed Urban Interaction. Citizens are taking to the streets in creative ways to question policies and impact change. Here are a few examples from around the country and we’ll start in Detroit. 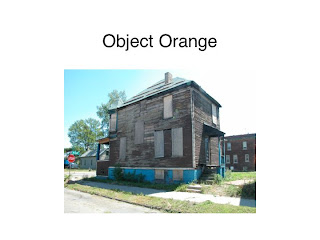 In Detroit, a city that has lost 50% of it’s population, an anonymous group calling itself Object Orange wanted to start a dialogue about the more than 7,000 abandoned buildings in the city, so they went out in the wee small hours of the morning and began painting abandoned, city-owned houses bright orange. 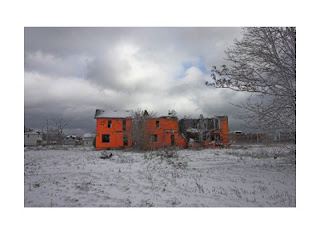 The effect was striking. The story gained national media attention, but more importantly, it helped spur city planning agencies to address the dilapidated buildings that they owned. 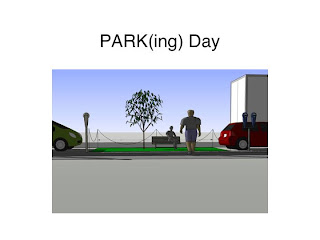 In downtown San Francisco, more than 70% of outdoor space is dedicated to the private vehicle, while only a fraction of that space is allocated to the public realm. A group of architects, designers, and artists known as REBAR created an intervention called PARK(ing) Day. They paid a meter for its two-hour limit, effectively leasing the land from the city in return for their quarters. They trucked in sod and benches and trees in planters and they turned the parking spot into an actual park that people could use. Passersby had the opportunity to feed the meter to continue access to the park. 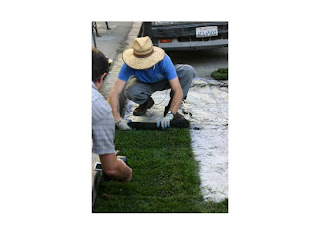 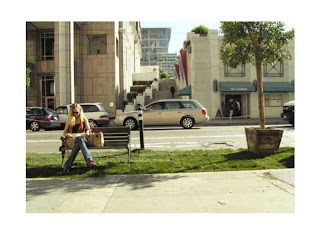 The Trust for Public Land, a national non-profit, is now underwriting country-wide observance of Park(ing) day. The event was just held in September and over 80 cities from Anchorage to West Palm Beach participated. 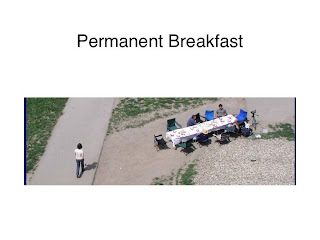 How public is our public space? In the American city we often have areas that are technically public, but feel less than inviting. Maybe it’s because of private management, rent-a-cops, surveillance, bad design, or a simple lack of use. Imagine, for example, what the cops would do if you used the public space around the Inner Harbor for your morning yoga? 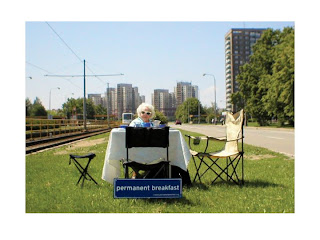 Permanent Breakfast is a way to test the validity of public spaces. One person invites others to join them for an outdoor breakfast in an underutilized spot. It provokes people to use places considered off limits and to ask “Why don't we come here?” 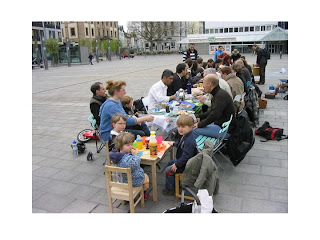 Permanent breakfast reinvigorates our relationship with common areas by bringing the private ritual of breakfast into the public arena. It reminds us that cities are places of interaction and for that reason, one or more seats is always left open for a passerby. 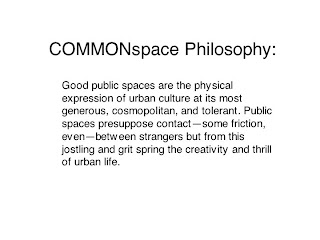 A group calling themselves COMMONspace asks the question: What happens when we start to lose true public space? How does that impact the messy vitality of an urban experience?

A common practice in cities is to create hybrid forms of common areas, often called privately owned public spaces. They can take the form of lobbies, atriums, outdoor courtyards, and promenades. COMMONSpace holds public events in these spaces to push the limits and see how public they really are. 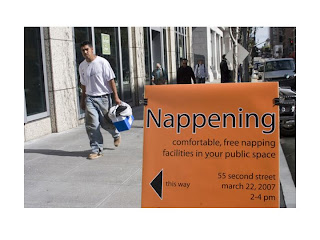 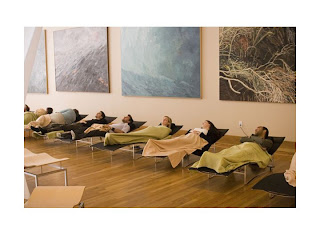 This one is called a Nappening. They’ve also hosted yoga classes, read-ins, and headstand and hula hoop competitions. In one case, a rent-a-cop tried to kick them out and the real police were called in. The police were forced to admit that the space in question was, in fact, public, and the peaceful performance was allowed to continue. 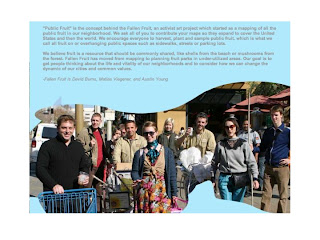 Speaking of public space, what about public food? A group called Fallen Fruit believes we should be able to shop the city. They mapped all of the free fruit available in Los Angeles and began advocating for more public fruit parks. It’s a reminder that many pre-industrial societies supported common areas for grazing animals, communal farming, and fishing.

Guerilla Gardening is happening in many cities. You find a blighted spot, go out at night with native species, and you plant. Here are some before and after shots of a median strip. 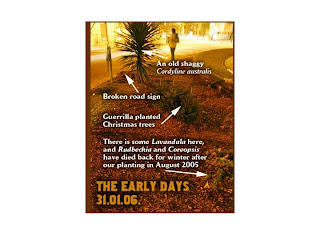 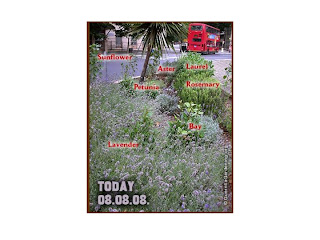 This raises the broader idea of reintroducing farms into our urban centers. What if some of that vacant land in Baltimore is used for largescale farming? 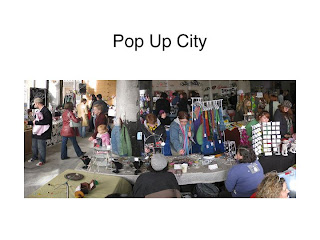 The group Pop up City in Cleveland hosts spontaneous installations in vacant lots throughout the city. They create temporary dog parks, markets, and events in places that would never normally see foot traffic. This one is called the Bizarre Baazar. 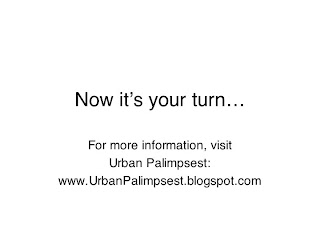 Now it’s your turn. What do you want to do? Anyone interested in staging an urban interaction in Baltimore should contact me. And anyone interested in talking more about design should joins us here at the Wind Up Space on the first Wednesday of every month for the Baltimore Design Conversation.

UPDATE: See what the Baltimore Examiner had to say about Ignite #1.

Posted by Urban Palimpsest at 8:04 AM