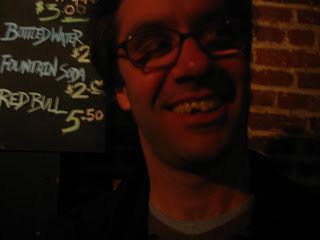 Nothing says rock-n-roll like losing a tooth. Last night I saw The Oranges Band open up for The Rosebuds at the Black Cat in D.C. Roman Kuebler, fearless frontman of The Oranges Band, cracked a tooth in half on the microphone and went on to play a full set. A rocking set at that.

In June, Roman launched a new endeavor, called Every7th.com. It's brilliant in its simplicity: think of it as buying a record on installment. For $1 a month subscription, you get two new songs from Roman, as well as liner notes and original artwork (this month, the art was done by Alex Fine). It is, essentially, a new distribution model for local musicians to reach broader audiences.

Click on the month of June, and you get access to one free month so you can see what to expect. Sign up and help Roman buy a new tooth. 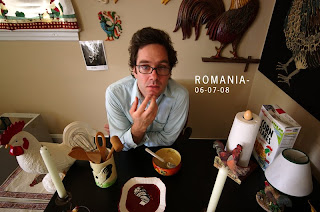 Roman in the halcyon days when he had a full head of teeth. From the launch of Every7th.com in June.
Posted by Urban Palimpsest at 11:32 AM