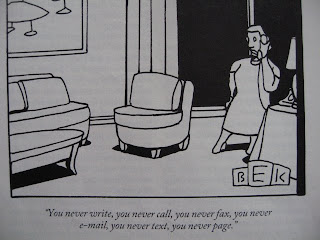 Cartoon from the Sept. 22 issue of The New Yorker.
Tuesday night I attended an event for the release of the book Open Spaces Sacred Places. It tells the story of individuals who turned blighted and forgotten lots into gardens and parks through the support of the Annapolis, Maryland-based TKF Foundation. One of the things that TKF requires is that each of their funded sites include a bench with a journal for people to record their thoughts. The books are placed in parks and gardens across the state and the resultant entries offer a lovely snapshot of the impact that time in nature can have on us. A researcher at UMBC has been collecting and organizing the thousands of journal entries from the last ten years and she talked with a group of us the other night about seeing these moments captured on paper. The handwriting, the drawings that accompany the work, the smell of the paper itself. Typed onto the page of the book, she said, the quotes lose some of their power. This sparked a conversation about how much communication has changed, which is a topic I've been thinking a lot about lately.

It's increasingly rare in this day of the social networking site to have an uninhibited outlet for writing or communicating. So much of our interaction happens electronically in platforms that have been highly designed: Facebook, Twitter, MySpace, etc. etc. While you have the power to say what you will (Blogger is not editing as I type), it's a little different than a blank piece of paper and a pen. Here's what I am seeing right now as I type this (you can click on it to see a bigger version): 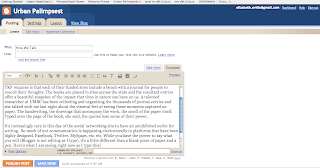 I can add pictures, movies, thousands of special widgets and link lists and such. I can play with my font and the color and the alignment and the layout. It's extraordinary, really, to have the ability to self publish and to think about words, images, layouts, fonts, etc. as the whole of my communique. And yet...

Here I am, sitting hunched over my laptop, alone, staring at a big white screen and putting a message out into cyberspace. I have faith that it will land somewhere and get read, that people may even respond, but I am not having a dialogue in the true sense of the word. There is more interaction these days, true, but does it always qualify as legitimate communication? Technically, I hear more from people through outlets like Facebook, but what does it mean when my friend in California "pokes" me? We've checked in on some level, but we have not engaged. This election has frequently reminded me that we have become a nation of monologues, a country of people speaking into an echo chamber.

This is not to say that what is being communicated online is all patter. I love finding blogs where people think through subjects in compelling ways. I never would have had access to that in the past, so we are constantly being introduced to new ideas and research like never before. The fact that this tiny 10" screen serves as an access point to the rest of the world is amazing. Equally amazing is our faith that it will always be here. As stalwarts of our culture crumble and disintegrate, as major financial institutions disappear, I suddenly realize how tenuous our connectivity really is. What if the Internet went down for a day? A friend recently told me of a crash years ago on one of the blogging sites that resulted in the loss of all material. He said people he knew lost years of work because they never backed it up. On those occasions when thoughtful communication happens electronically, how many of us save it, print it out, back it up on a hard drive, or keep some kind of a record for later? A woman at the event on Tuesday talked about the power of written letters and cards and journal entries as triggers for past memories. She realized that the last several years of that kind of communication has been lost for her.

What interests me isn't a condemnation of this new media or a reverence for the good old days of pen and paper or in person meetings. What interests me is how the design and fabrication of these new media platforms impacts how we perceive communication and how we talk (or don't) to one another in real life. If the old adage, "How you spend your days is who you are" is accurate, then we are spending more and more of our days flipping the channels, so to speak, between different forms of communication. We are dedicating as much time (if not more) to tricking out our Facebook pages and our blogs as we are to engaging one another in more traditional forms of dialogue. I can't help but notice that even in the most thoughtful and gracious of groups, we are struggling to follow the fundamental rules of conversation. We are a generation, a country, of talkers who increasingly does not know how to listen. We are not being asked to engage in that act as frequently, especially as we conduct more of our lives via a keyboard. If there is one thing that needs to be injected back into our values system, it is the ability to listen. We do not need a country of mavericks, we need a country capable of hearing one another and the rest of the world.

And speaking of the rest of the world, it's valuable to remind ourselves from time to time of who, exactly, is joining us in this virtual room. While more countries are connecting to the Internet every day, the reality (according to UNESCO) is that about 4% of the world is online and 82% of Web sites are in English.

This is a preview of the documentary: The Listening Project.
Posted by Urban Palimpsest at 9:54 AM