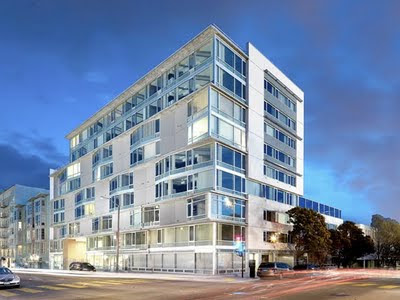 Parkview Terrace, an affordable housing development for the elderly in San Francisco that combines universal design with beautiful aesthetics. A portion of the 101 units were set aside for the homeless.

I'm flying to Boston tomorrow night to be a part of a panel discussion on Thursday at the annual Build Boston Conference. The topic: New Models of Home for our Third Age (scroll to the bottom of this link).

I'll be presenting projects from the book I am researching about new models of residential design for our aging population (more on this in the not-to-distant future, I hope). I touched on this topic last year in an article for Architect magazine.

I'll be joined by Gabriela Bonome-Sims from the Institute for Human Centered Design, Elaine Ostroff, Hon. AIA, and Susan Szenasy of Metropolis magazine. The talk runs from 6-7:30, so for those of you heading to Build Boston, I hope you'll pop by.
Posted by Urban Palimpsest at 6:33 PM 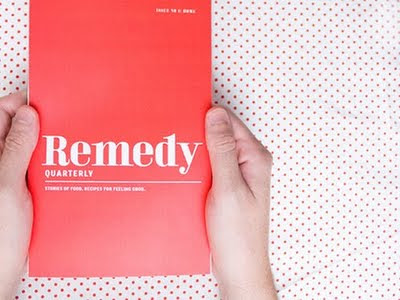 I was invited to dinner last week by a group of undergraduate graphic designers at the Maryland Institute College of Art involved in a course called Design Coalition. Taught by professor Ryan Clifford, the course partners with members of the East Baltimore community to bring graphic design and problem-solving to a neighborhood struggling to come out from under years of disinvestment and decline. The dinner was a chance for the students to cook their favorite dishes for some of the community members and to get to know each other better.

One of the guests was a woman named Ma Perkins. Ma has lived in East Baltimore her entire life and when asked what her neighborhood needs to recover and sustain itself, she talked about the young people. "They don't know how to take care of themselves. They are always looking to others for help," she told me. She talked about growing up in a family that hailed from St. Mary's, a rural farming community in Southern Maryland, where her ancestors were slaves on tobacco farms. She talked about knowing how to make a bag of groceries last for weeks, and how to stretch basics like beans and rice. Her generation, she said, knew how to take care of itself and fix what needed fixing. She talked about skills like carpentry and quilting and sewing, and how those are lost to kids today. This got us on the topic of simple home remedies. "You know the best cure for a cold with a cough? White onion," she said. You take an onion, slice it thin, top it with sugar and lemon, and let it cure. Then, Perkins explained, you drink the syrup. "That cold will be gone in no time."

This return to basic resourcefulness is a part of the DIY design movement, but what Ma Perkins was addressing goes deeper. It's not just about making something new, it's about making do.

We started to hatch a plan for gathering some of the elders in East Baltimore for an Old School Remedy night where they could pass along lessons and skills that may otherwise be forgotten. We talked about making a cookbook—or a sourcebook—to gather these stories and ideas.

Seems Ma Perkins is on to something.

Making the rounds on the Web last week was news of a new Brooklyn start-up magazine called Remedy Quarterly. The magazine has the tagline: Stories of Food, Recipes for Feeling Good. They explain their publication this way:

Remedy Quarterly is a magazine of food stories and the recipes that go with them. We love that food is a common language and drew inspiration from community cookbooks. The first issue of Remedy Quarterly starts where food often starts—at home. We have stories of family coming around the table, a cake that brings the author home in her mind, and a vegetarian coming home to omnivorism.

And, of course, there are the remedies. Though some of these sound downright awful. (And dumb. Raw egg in warm beer for a hangover cure? I think Remedy Quarterly needs a Remedy Test Kitchen like Cook's Illustrated.)

In addition to the obvious overlap in the conversation I had with Ma Perkins, I thought the two pages that the editors sampled from their inaugural issue to be particularly coincidental in light of our dinner gathering among friends: one about onions, the other about food... 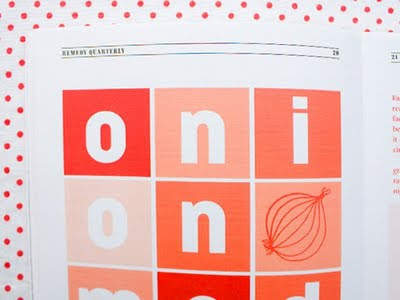 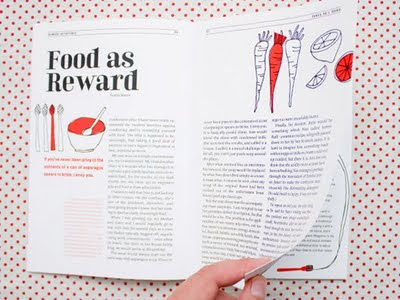 Posted by Urban Palimpsest at 3:11 PM 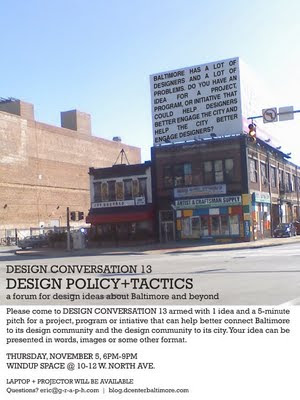 If you are free tomorrow evening, Nov. 5 from 6pm-9pm, I hope you can pop by the next monthly installment of the Baltimore Design Conversation. The topic is "Design Policy + Tactics." (Click on the above image to get more details.)

As usual, the event will happen at the Windup Space, 10-12 W. North Ave. near the corner of Charles Street. The event is free and open to the public. You are invited to bring ideas and share your thoughts with the group or just swing in for a beer and some interesting conversation.

For those of you not familiar with the event, the Baltimore Design Conversation is a monthly program organized by a group of people (including myself) who think design culture should play a greater role in the future of Baltimore. The Design Conversations have been a way to highlight significant work being done by designers and to discuss design issues relevant to Baltimore and cities in general. It is also an outgrowth of the D:center Baltimore.