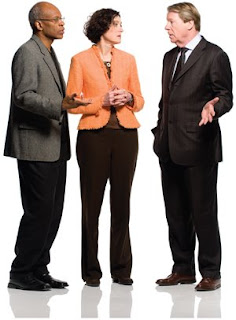 Photo by Mike Morgan for Architect magazine. Left to right: Maurice Cox of the National Endowment for the Arts, Christine McEntee of the AIA, and Chase Rynd of the National Building Museum.
Architect magazine has been running a series of articles about how the economic downturn is impacting the architecture community (click here to read the first installment by Amanda Kolson Hurley). The latest piece was written by me and it's in the new April issue. I spent a few months this winter interviewing deans, executive directors, foundation leaders, students, and faculty to understand how this recession is changing the nonprofit and academic sector. A short excerpt is below along with a link to the full article at ArchitectMagazine.com.

Design centers, architecture schools, the AIA: how are they doing? Nonprofits aren't insulated from for-profit problems, especially in a recession like this one.

You know things have really gone askew when an architect sets up shop in a lemonade stand. Seattle-based John Morefield made news this winter when he began selling design advice from a stall at a local farmer's market—for a nickel. “I was laid off twice this year, and I decided to open my own design firm, and I needed a way to meet people,” Morefield told a local reporter. 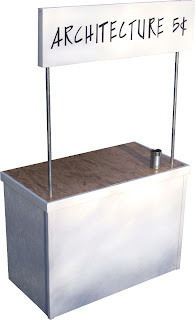 It may be unorthodox, but in tough economic times, what's an architect to do? The question is just as pressing for the dozens of institutions that support and promote the architecture profession—museums, design centers, foundations, and colleges and universities. Endowments have been decimated; state budget cuts are forcing layoffs, furloughs, and hiring freezes; and shrinking credit lines are jeopardizing financial aid and scholarships.

While many architecture institutions are struggling, they also are busier than ever, as perceived safe harbors in the current economic storm: Applications to U.S. architecture schools are up by as much as 60 percent, and the design division of the National Endowment for the Arts (NEA), a federal grantmaking agency, is seeing a dramatic rise in proposals. The division's applicant pool doubled in the third quarter of 2008. “I can't tell you how many nonprofits were born when people got laid off and saw it as an opportunity to become a design entrepreneur,” says Maurice Cox, the NEA's director of design.

READ THE REST OF THE ARTICLE BY CLICKING HERE.

Posted by Urban Palimpsest at 12:43 PM