Kansas City-based architecture firm HOK Sport just unveiled a new name and identity after management purchased the business from parent company HOK. The firm, which specializes in sporting venues, will now be known as Populous. And don't forget the TM, which shows up everywhere, including Web search returns:

"Everything we do is full of people," one manager is quoted as saying. So first, the grammatical issue, beyond the annoying construction of that quote. I've been trying to think of another major architecture firm that has named itself with an adjective. Anyone?

The name itself reminds me of what happened in the car industry, when suddenly models were rebranded with attributes. The Ford Fiesta became the Ford Aspire (which raises lots of possibilities: "I aspire to own a better car." or "If Ford had aspired to green their cars not just their plants, they may not be in the mess they are today.")

The name and the subsequent explanations feel like we've become privvy to the early stages of a brainstorming session. Populous is the springboard for a concept; it's not the concept itself. If you have to spend several pages of your Web site explaining your choice of firm name, chances are you have not succeeded.

The rebranding has not gone unnoticed by the Kansas City press. "Why ditch a well-known name for one that sounds like a pharmaceutical-grade acne medication?" asks Nadia Pflaum of Pitch Week.

And who affixes a trademark symbol to every useage? Trust me , no one is going to steal this name. Though they may be in trouble with Nintendo. 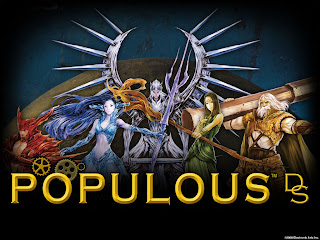 The Populous video game was released in the fall of 2008.
Posted by Urban Palimpsest at 5:20 PM