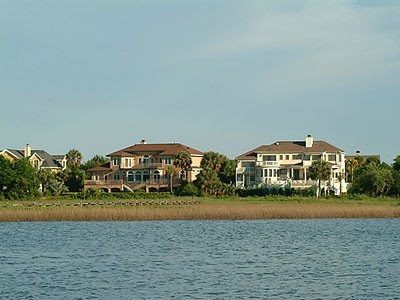 Homes lining the beach of Isle of Palms, South Carolina
While in South Carolina recently, I had the chance to tour several newly constructed homes on the Isle of Palms, a 7-mile long island thirteen miles from Charleston across the Intracoastal Waterway. These houses were the million-dollar kind, perched on stilts and near the beach with lots of whistles and bells. One of the homes was newer than another, and you could see the difference in amenities: here the custom cabinetry had drawers that actually shut themselves with the slightest little tap. A central vacuum system helped clean the hardwood floors with their specialty inlay. In the kitchen, appliances were camouflaged to match the cabinetry and silent enough to make you think the multitude of lighting overhead may have blown a fuse and they’d stopped running altogether.

The house was empty, in the final stages of construction, and as I wandered through room after room and heard the descriptions of the space from my tour guides, I kept thinking about my iPod and how big it is. I have an early model, and to compare it to the slim and sleek models of today, it seems oversized and slow. It’s amazing how quickly our technological devices seem dated. In the other house, you could actually hear the dishwasher. How 2007.

Obsolescence may now be having an impact on real estate, not just our gadgetry or our cars. One of the complaints about the newer home described above was that in spite of all the latest in domestic luxury, the builder had created custom media centers. A talented carpenter, he made beautifully constructed, intricately detailed built-ins equipped to house and electrify all media needs. The potential buyers decided it was a big problem not to be able to put their TV’s anywhere they desired. “What if we wanted a bigger flat screen? What if we want to affix it to the wall?” they pondered.

Daniel McGinn just wrote an article for Wired magazine about how our thirst for technology may be partly to blame for the glut of new construction that’s contributing to our overall real estate downturn. He writes:

“That charming 1920s three-bedroom craftsman wasn't built to accommodate all these new devices, much less modernized subsystems like updated electrical, solar power, or flexible plastic plumbing. Which is one reason Americans have come to prefer new homes to pre-owned ones. Check out these numbers: In 1993, just 48 percent said they hoped their next house would be newly built. By 2004, that number had grown to 74 percent.”

People are flipping homes for the shinier, newer model, he adds. The solution, McGinn suggests, may be in rethinking how we construct homes now that technology is such an integral factor in our lives.

In October, I toured some very different homes from the ones on the Isle of Palms—the entries for the 2007 Solar Decathlon sponsored by the Department of Energy. Twenty universities from around the world were competing to create an energy-efficient home that could run strictly on solar power. They were labs of new home construction concepts. One of the clear themes was the desire to make it easier to both incorporate technology and to access infrastructure, like plumbing and electric, to run the machines. One of the entries concealed its pipes and wires beneath removable, raised floor panels so that accessing these things did not require tearing into plaster or drywall.

Sustainable design visionary Pliny Fisk worked with a team from Texas A&M to design what they dubbed the GroHome: a kit of parts that allows the user to adapt the house over time as needs change. They applied Open Source systems thinking and recognized the role that technology needs to play in the design and fabrication of architecture. 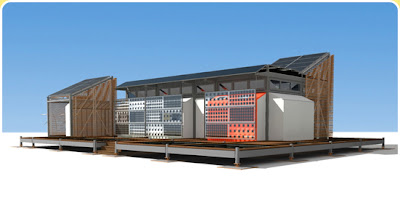 A rendering of the Texas A&M GroHome concept

The design team writes in their vision statement:

"By infusing community into the creation process—discovery and innovation accelerate. Take the examples of Wikipedia.org, YouTube.com, and Mozilla Firefox; apply them to architecture, and you get the groHome. By utilizing a building system we can construct our groHome from multiple locations at once, move our entire kitchen any time we want, and involve designers from around the world."

Posted by Urban Palimpsest at 5:57 PM